I finally had an opportunity to play with a couple of the recent arrivals in the tablet space: the RIM Blackberry Playbook and the Motorola Xoom. Having read the reviews and evaluated the specs, I was looking to compare my Internet-provided conceptions with actual experience. The results were surprising.

Given the market superiority of the iPad, a potential competitor must carefully tailor their product offering to not merely match, but exceed the capabilities of the incumbent. And the well-established problems with these competitors is that, by the most important measures, these competitors have failed to match the iPad on two important vectors: features and price.

So it was with these thoughts in mind that I fondled a Playbook and Xoom at my local Future Shop this weekend. And while I have a ton of impressions about the hardware and the software offerings of each device, I found myself struck much more by the statements they made as physical artifacts. In other words, leaving aside what each tablet actually does when you get it home, how do they stack up against each other in the store? What impression does one get when these things sit side-by-side in a retail environment?

My impression is that RIM and Google have very consciously designed their primary interfaces to demo well.

The iPad is Boring There, I said it. I’m as big an Apple fanboy as you’re likely to find, but if you’re like me, you have to admit there was a tiny part of you that deflated when Steve unveiled the iPad. You were hoping the Springboard would have a little more in common with a traditional computer. But instead, we got iPhone-Plus: 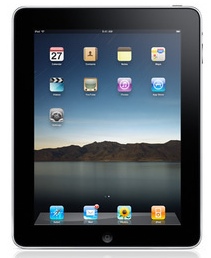 It’s functionally identical to the iPhone UI. And while we have few complaints about how well it works, I think we can all agree it’s more Pravda than, say, Village Voice. But it gets the job done, dammit, and we’re there for the apps, not how it looks when you’re not actually using it.

Conversely, I think the Xoom and the Playbook are at their best when they’re not being used. Consider their standard interfaces: 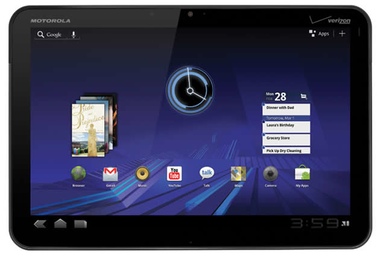 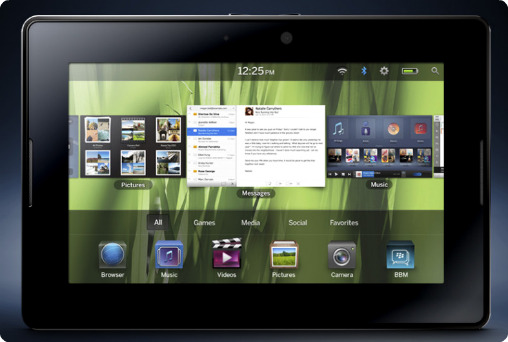 There’s no denying it: these tablets look more interesting than the iPad. The Playbook in particular is a very sweet-looking OS, with lots of cool things going on. An application dock on the bottom, and a live preview of your running apps in the main view.

If you’ve seen the reviews of the Playbook, you’ll know one of its marquee features is its multitasking capability. The QNX real-time operating system at the heart of the Playbook can play multiple videos simultaneously and without dropping frames. So I tested this myself: I pulled up a gorgeous nature video featuring sharks and dolphins and grass blowing in the breeze. My 7-year-old daughter enjoyed the animals. But when I swiped into multitasking mode to play another video, she stopped me with “hey, I was watching that!”

Has nobody else asked why anyone would want to keep a video running while you go to another application? That strikes me as a cool feature to demo, but once you get the thing home, remains utterly unused.

The Xoom is similar in this regard. Its home screen features a giant clock, and its ability to embed so-called “widgets” on the home screen seem like a really great idea while you’re standing in the store. But overall, I found so many things going on with this device, it felt like a total mess: controls crammed in every corner, uncertain spatial positioning of individual screens of either widgets or apps, and that typical feeling of Android’s lack of polish, which ultimately hampers your interaction every time you pick it up.

But it looks cool!

Like a good movie, I think the iPad has succeeded based on the positive reviews of the first users. The Springboard is nothing to write home about, but the overall experience is so compelling that it doesn’t matter. But these new tablets may stand a chance when they sit beside the iPad. I think the ultimate test will be when those tablets get home and people have to live with them every day.

From what I’ve seen, I don’t like their chances.